Cabo Is BLOWING UP!!!

We just returned from a week-long adventure in Cabo San Lucas, Mexico. We went down there with minimal activities on the agenda, but ended up staying very busy the whole week we were there.  We arrived in Cabo around 11am, and it was already 90 degrees! If you have never been to Cabo before, here are a couple of words of advice for once you exit the airport…

Cabo San Lucas is a town that relies heavily on its tourism. Especially since it was hit with the hurricane a few years back.  They have since recovered and most everything is rebuilt.  But the number one thing you need to be prepared for are timeshare presentations! The whole town is based around getting tourists to go to timeshare presentations in exchange for various gifts.  Before exiting to the taxis we were approached by several timeshare ‘sharks’ as I like to call them.  They are representatives for  various condos and resorts in cabo.  They start right away with asking what you are planning on doing when you are in town, and then they start offering you gifts.  Whether you are interested in owning a time share or not, if you are willing to give up 2-3 hours out of your vacation time, it can definitely be worth your while, as long as you ask for as many gifts as possible. Know that these sharks have a certain amount of gifts that they can give you, and make sure you milk every last drop out of them.

I was approached by several sharks and got an amazing deal from one of them.  He worked for Diamante resort, which is home to two amazing golf courses, one of them being a Tiger Woods designed course, that just recently opened about 6 months ago.  In exchange for going to the presentation, we negotiated that we would get two free rounds of golf, which each round is around 300 dollars to play on one of those courses, if you are not a member. Plus we had them throw in free club rentals which were 50 dollars to rent.  Also we got on a booze cruise that had a ticket value of 70 dollars a piece for only 10 bucks! and last but not least, 2 free messages at the Diamante spa which is equivalent to 60 dollars cash (which the ladies ended up just taking the cash).  Moral of this story is, if you are going to agree to a presentation, make sure you have them give you as many gifts as possible!

After our negotiations with the shark, we took our prearranged shuttle to the Cabo Villa beach resort that we were staying at.  The location of Cabo Villas was amazing.  A couple blocks away from downtown Cabo, and right on the beach next to the infamous “The Office” restaurant that has been in Cabo for decades.  And the views are breathtaking! 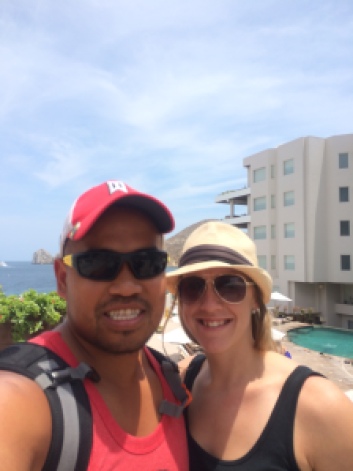 After traveling all morning we were excited to get some food into our system and sip on some adult beverages!  The drinks are delicious and just about every restaurant you go to on the beach, the drinks are 2 for 1. Mixed drinks were roughly $7-8 dollars, same prices as here in America but they give you two.  They were definitely tasty!

After we got our drinks and some nourishment we checked into our room and then changed into our bathing suits and headed to the pool!

The ladies then decided they wanted to have a flex off. 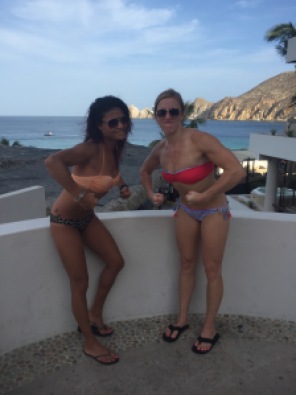 The people pictured are our good friends Hashim & Sarah Hall.  I would like to mention that they are awesome travel companions, we all get along very well and everyone is very easy-going.  We would like to thank them for inviting us along on their vacation and letting us stay with them in their condo.  They are Cabo experts! They have been going there for the past 6 years and they made this trip amazing for us first timers.  Especially with the cuisine recommendations!  The first night we were there they took us to what is now our favorite restaurant in Cabo called Las Guacamayas (Parrot).

There are only a few locations in Cabo, and it is locally owned by one family.  Hashim and Sarah took us to the one that they first went to 6 years ago.  This one that they took us to was about a 20 minute walk outside of downtown Cabo.  It was real authentic Mexican cuisine that makes my mouth water just thinking about it.  The walk there was long and hot, and few tourists were around, that’s when you know you are getting into the real Cabo.  They have lots of dishes that are special just to them.  One of those dishes is a fried cheese that is in the shape of a burrito.  It doesn’t look like much but it was very tasty.

The drinks were also delicious.  Margaritas were made with fresh fruit. And I (Tip) got my first ever “bulldog’ drink.  Ive always wanted one for as long as I can remember.  It is a margarita with a beer flipped upside down in it. 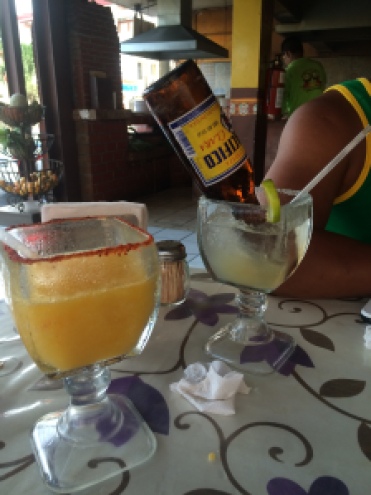 After the drinks and appetizer, here come the main course! Sure they have the usual fajitas, tacos, and burritos, but what they are best known for are their stone bowls! Words do not do it justice so I will just show you the picture first.

In this stone bowl you can get various types of meats.  I opted to get them all and order the combination bowl.  Some of the things in this bowl are chorizo, chicken, steak, and cactus.  Yes I said cactus!! It was an interesting texture but very delicious. I recommend this to everyone who has the chance to make it to a Las Guacamayas.  We enjoyed this restaurant so much that we ate there on 3 separate occasions on the trip. We would have eaten there every night but we had to give other restaurants a taste, but none of them are even worth mentioning compared to Las Guacamayas.  The other times we went we found out that there was one in downtown and the quality was the same as the original one that we went too.

So that was just the first day of our trip! There is so much more that we did: Golfing, Sunset Cruise, riding on an 80 foot yacht, parasailing… Stay tuned for those in future posts!